An Explosion of Creativity at Work

April 23, 2012
The following exchange with a co-worker definitely didn't happen on company time.  No sir.  And if it did, which it didn't, it couldn't have happened any time in the last four months, that's for darn sure.

I can't remember the details of how this conversation started, or why we were talking about living on another planet, but I believe that it went something to the effect of my friend asking me what it was like living in my own world.  At least, that sounds like something that people would say to me.

In case you can't read the image, I've transcribed it below.  Because I like typing. 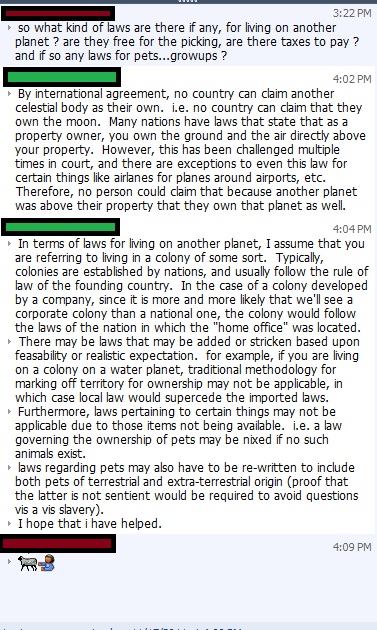 Text (including all the spelling and grammatical errors, and possibly adding a few new ones)

Friend
so what kind of laws are there if any, for living on another planet ? are they free for the picking, are there taxes to pay ? and if so any laws for pets...growups ?

Me
By international agreement, no country can claim another celestial body as their own. i.e. no country can claim that they own the moon.  Many nations have laws that state that as a property owner, you own the ground and the air directly above your property.  However, this has been challenged multiple times in court, and there are exceptions to even this law for certain things like airlanes for planes around airports, etc.. Therefore, no person could claim that because another planet was above their property that they own that planet as well.

Me
In terms of laws for living on another planet, I assume that you are referring to living in a colony of some sort.  Typically, colonies are established by nations, and usually follow the rule of law of the founding country.  In the case of a colony developed by a company, since it is more and more likely that we'll see a corporate colony than a national one, the colony would follow the laws of the nation in which the "home office" was located.
There may be laws that may be added or stricken based upon feasability or realistic expectation.  for example, if you are living on a colony on a water planet, traditional methodology for marking off territory for ownership may not be applicable, in which case local law would supercede the imported laws.
Furthermore, laws pertaining to certain things may not be applicable due to those items not being available.  i.e. a law governing the ownership of pets may be nixed if no such animals exist.
laws regarding pets may also have to be re-written to include both pets of terrestrial and extra-terrestrial origin (proof that the latter is not sentient would be required to avoid questions vis a vis slavery).
I hop that i have helped.