The demand for follow up on the situation with toilet training the cat has been unprecedented.

Literally, some of you asked me how it was going. Strangers Co-workers People who are friendly with me at the office sought me out just to find out asked about it while waiting for the microwave.  It's been a whirlwind, taking me back to the days when snowblowers were all the rage. I have been looking into public relations firms to handle the inevitable media coverage.

The question that you're all asking: "Was this week toilet training your cat better than last?"

Look, toilet training your cat isn't something that's going to happen overnight. or over a week.  Or even two weeks (apparently). Rome wasn't built in a day and it was founded by twin brothers raised by a wolf so you can only imagine what the toilet training situation was like there.

The experience so far was not an overwhelming success, but I can't dwell on the past. I have to stay positive and learn from it. Instead of saying the cat didn't use the litter box 3 days in a row, reframe it as the cat didn't use a bathroom fixture for more than half a week! (I assume that he peed in the shower on the same day he pooped in the sink, because I am an optimist training a cat to use the toilet.)

There aren't a lot of famous cat training shows in popular culture, but if there is one thing I know from watching "The Littlest Hobo" and "The Dog Whisperer" (and that one episode of "Highway to Heaven" with the kid living on the streets who just wants to feed his kitten...) it's that animals can sense your moods and will react to your energy. I believe cats can as well, they just don't give a crap. Except, you know... when they do. 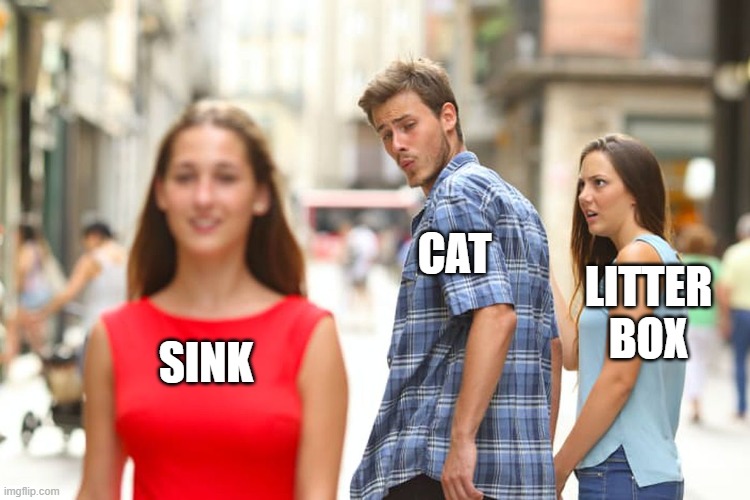 You have to be flexible and adapt your approach. I mean, it would be insane to do the same thing over and over expecting a different result, right?

The bathroom had not been fully cleaned since becoming the litterbox room and had been abandoned by the more cultured and discerning bathroom user and given up to transients and perhaps more than one cat and/or racoon(s). That is how my wife described it to me when it was her turn to clean the litterbox. She used other words but since she cleaned the bathroom too I am placing her in as positive a light as possible.

The cat gave it his seal of approval to our combined efforts. Not only did the cat use the litterbox every day, but the bathroom (and by extension the rec room/my office) was also a much more pleasant space.

I put the bottle of bathroom cleaner in the sink just to be on the safe side.  "He won't use the sink if there is something already in the sink," was my flawless logic. Yes, last week I did end up throwing out a bottle of soap that was a casualty (it was easier to do that then to try to clean it and confront my laziness). By using my expert forensics skills I determined that the way the poop covered the bottle was indicated that the cat knocked it over after doing his thing.

I went to bed on Wednesday basking in the knowledge that we had hit the halfway mark of the week and how wonderful it was to only have to worry about things like my child, work, and a global pandemic.

Don't get ahead of me.

I checked the bathroom the next morning and nothing was amiss. "Ah ha, everything is fine here," I said in a moment of hubris. "I could clean the litterbox right now, but since I am going to the office I will clean it upon my return home. Huzzah, for I am a skilled planner and master of my domain."

Imagine my surprise when I returned home after a busy day doing business to discover the cat had also had a busy day doing his business.
My flawless plan utilizing the bottle of bathroom cleaner?  The bottle was totally clean, but had shifted position.  Again, using my expert skills (I don't know why I'm not a sexy highly paid forensic scientist), the only reasonable explanation is that the cat used the bottle as reading material while he pooped.

After giving everything another thorough cleaning, I wrapped the entire sink in plastic wrap. My daughter provided some signs that I think really helped everyone.

After tallying up the results for this week, I say that it was more successful than Week 1. This week, I begin to raise the litterbox.  I cannot possibly fathom a way in way in which that could go wrong.

Final note: for anyone who doesn't know me personally, I know I'm not using that "Seinfeld" reference correctly. Please understand that this was a joke and that my knowledge and love of "Seinfeld" is rivaled only by my passion for sports.

Update 11/24/11 6:30PM:   I'm over 100K hits!  Man, that is insane.  I was sent this link  of some guys doing a charity fundraiser who were reading my ad online.  I can't believe the number of people that have responded... Feeling pretty awesome right about now! Update 11/24/11 7:04AM:   I have a lot of email.  Hooooboy, have I got email.  And over 30,000 hits on the ad!  On the downside, I have to go to work.  On the upside, the new snow plow guy came and I don't have to shovel anything!  Huzzah! Update 11:32PM : So I've stayed up waaaaay too late replying to emails and generally riding the viral wave that my ad has become.  I'm over 8600 views (really wish Kijiji would update more often...), and I'm getting emails from as far away as Sydney, Australia.  The emails are still coming in, though not as fast and furious as they were earlier this evening. I'm up to two offers on the snowblower so far, but neither was where I was hoping it would be.  Ma