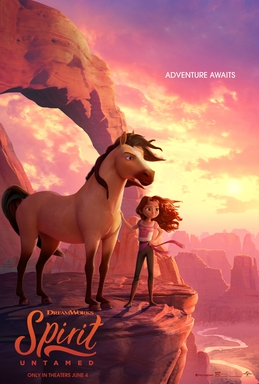 For those of you who may be unfamiliar, this is a movie based on a Netflix show "Spirit Riding Free".

This, in turn, is based on a movie "Spirit: Stallion of the Cimarron" (which positively rolls off the tongue). 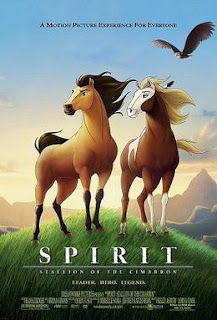 But not actually.
The show is based on a single character from the original movie.
But not really.
The titular character is Spirit, a wild horse in the Old West, and these are the stories of his adventures.
But, again, not so much.
Only the first movie is actually about the horse and his adventures. The show and the new movie include Spirit, but more as a supporting character for the real hero, a young girl named Lucky. She and Lucky have lots of adventures together and learn important lessons.
Or, stay with me, do they?
Lucky, at the very least, grows as a character. We can't really be sure what the deal is with Spirit. He's the narrator of the first film, voiced by Matt Damon, so we understand everything that he's going through. But we never hear what's going on in that horse head of his in anything that came after. How happy is Spirit with the way things are going? Why does he stick around? What's in it for him? What's his motivation? No clue. But that's okay because he never interacted with anyone in the original movie either.
Except that he did.
His name was Little Creek, and he was a Native American who had been captured by bad guys along with Spirit. Together, they learn to trust each other and escape from the bad guys and along the way discover they really aren't so different from each other, and the movie ends happily (spoiler alert) with them reuniting with their families/herd.
But Little Creek never shows up again, even though the show and new movie allude that the events of the original movie take place before either the show or the new movie. For example, a major plot line of the bad guys is the construction of the railroad, and guess what Lucky's father does for a living? He's a railroad man. So where is Little Creek? In this animated universe, I think it's fair to say that he's off being happy and free with his tribe and they've put all the unpleasantness behind them while they live in harmony with nature and never being troubled again. Besides, they can't be expected to add all the characters from the original movie into the show, they wouldn't have time.
But... maybe they did?
Remember when I said that it was a reimagined show? Well, that show has 52 episodes across 8 seasons on Netflix, a streaming service that is notorious for cancelling shows after just one season.
Except that it wasn't the only show.
It was followed up with "Spirit Riding Free: Pony Tales" (10 episodes), "Spirit Riding Free: Riding Academy" (16 episodes), and a choose your own adventure movie "Spirit Riding Free: Ride Along Adventure". Still, that's only 1000 minutes of story time, so you have to cut them some slack for not being able to fit everything in.
Finally, what about this particular product was screaming for the need to reboot the reimagining? Because that's what "Spirit Untamed" is, a reboot of a show which is the reimagination of a movie from which it takes almost no source material at all. Was this really the void that the market needed filled?
Anyway, I guess the important thing is that my daughter loved it and she got to wear her new Spirit Untamed t-shirt to the movie, and she wasn't too disappointed that the Special Limited Edition Spirit Themed Popcorn Combo was sold out, and she brought some of her Spirit toys with her on our family vacation trip to play with in the car, and she started re-watching the first series again on Netflix. I guess that it's all about the kids being happy and entertained, right?

Update 11/24/11 6:30PM:   I'm over 100K hits!  Man, that is insane.  I was sent this link  of some guys doing a charity fundraiser who were reading my ad online.  I can't believe the number of people that have responded... Feeling pretty awesome right about now! Update 11/24/11 7:04AM:   I have a lot of email.  Hooooboy, have I got email.  And over 30,000 hits on the ad!  On the downside, I have to go to work.  On the upside, the new snow plow guy came and I don't have to shovel anything!  Huzzah! Update 11:32PM : So I've stayed up waaaaay too late replying to emails and generally riding the viral wave that my ad has become.  I'm over 8600 views (really wish Kijiji would update more often...), and I'm getting emails from as far away as Sydney, Australia.  The emails are still coming in, though not as fast and furious as they were earlier this evening. I'm up to two offers on the snowblower so far, but neither was where I was hoping it would be.  Ma