Horton Wasn't the Only One to Hear a Who!

Okay, maybe not the whole thing. Parts of it. Small parts. Parts that I didn't know I had. No, wait, that doesn't sound...

If you haven't read the book "Horton Hears a Who" (and I'm going to segue here to say how interesting it is that I only had to type 'Horton' and my auto suggest came up with the rest of the title; I find that fascinating and terrifying), the premise is that an elephant named Horton hears a very small sound and discovers a civilization of microscopic creatures called the Whos. He is the only creature in the jungle to believe that the Whos exist, and all the other animals spend the book trying to get him to admit they aren't real and also killing the Whos.

It all boils down to the phrase "A person's a person, no matter how small", which is repeated enough that you understand that this is an important lesson, but not so often that you wish Uncle Ben hadn't died so Spider-Man would stop flashing back to it so often.

It's a heartwarming book and I don't really remember it growing up. This was probably because my parents have good taste and realized it wasn't a great book. Oh, call the police, I don't like a Dr Seuss book. Face it, it's no "And to Think I Saw It On Mulberry Street". It doesn't matter what I think anymore because my daughter loves it, so I'm putting my time in now hoping that I won't have to read Twilight later.

So, imagine my surprise when I discover that there is a shadowy element to this book. A single line that changes everything, and puts a darker spin on almost everything that happens to Horton. Before you read any further... SPOILER ALERT.

Here's a page from around the middle of the book: 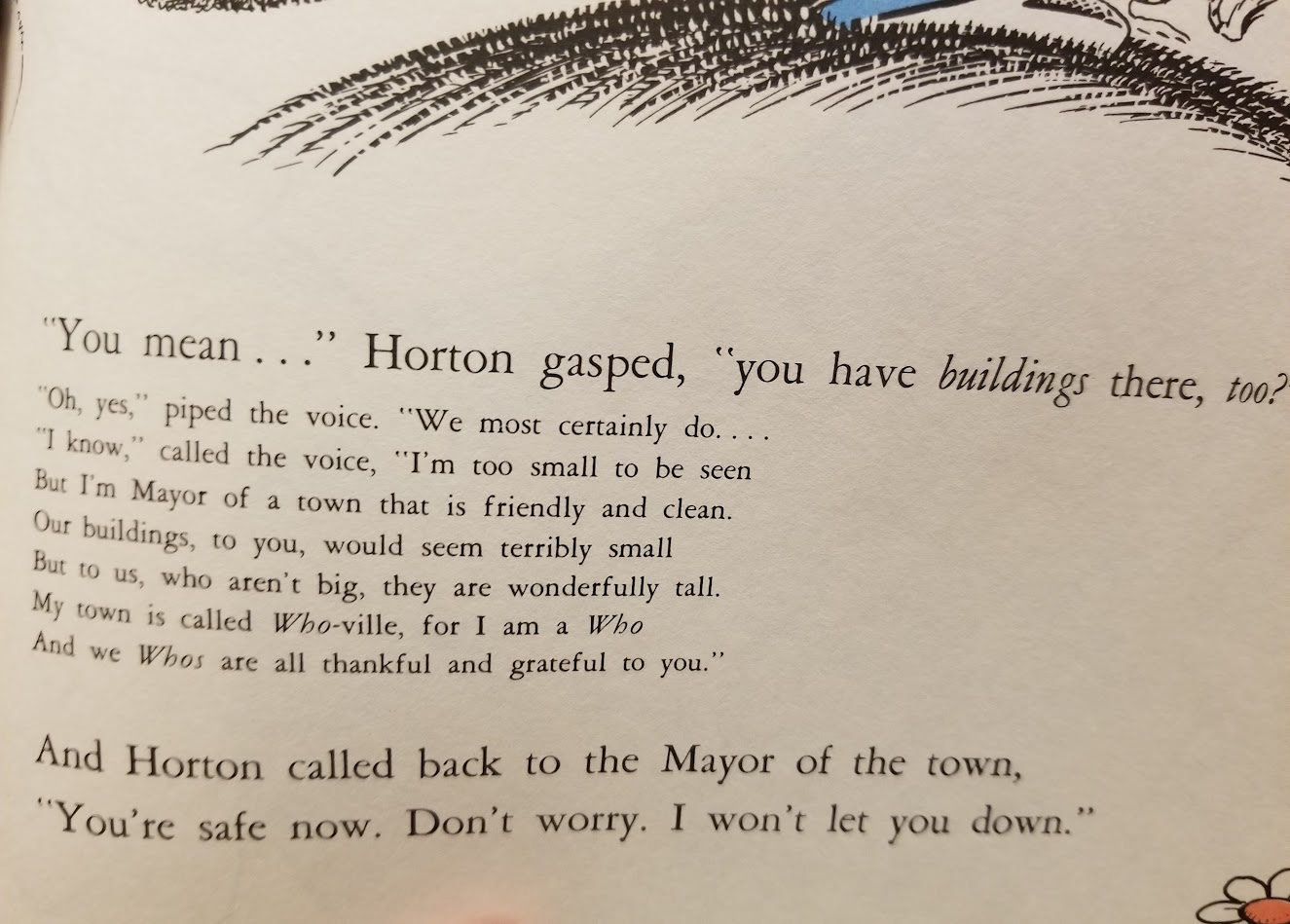 This is the first time that the Mayor of Who-ville has identified himself as the Mayor and as a Who. Previous to this, Horton's just sort of yelling at this tiny voice coming from a speck of dust.

The next page introduces us to a bunch of monkeys called the Wickersham brothers. They are in league with a really mean kangaroo for the duration of the story, doing the kangaroos dirty work.

They are very mean monkeys. But they're even worse than your kid thinks.

The conflict of the story centers on the fact that only Horton can hear the Whos. It's right there in the title. None of the other animals can hear them, so they believe Horton has made it up and punish him for it. Really terrible things. It's a whole big thing. And through all the trials and tribulations, Horton keeps going on with his claims that he knows the Whos exist and that they deserve to live.

And right through to the end, the Wickersham Brothers (and cousins, etc) are right there, persecuting poor Horton. Because nobody can hear the Whos except for Horton.

They MUST have heard the Whos. Because Horton never says "Who" or "Mayor". Only the Mayor of Who-ville says that.

The Wickersham Brothers know the Whos are real, but they participate in the persecution of Horton along with the other animals because it's fun. Only after the Whos finally prove their existence to the Kangaroo do they stop. The final scene of the book is a picture of Kangaroo and Horton bonding over a shared goal of protecting the Whos. But there's no Wickersham Brothers.

The real lesson of the book isn't what Horton keep saying over and over. And it's not that if you believe in something hard enough your belief will eventually win over others. And it isn't about perseverance in the face of adversity or the power of knowing yourself or any of that.

I think the real lesson of this book is sometimes people will do bad things to you because it's easy and it's fun and confronting them head on will only make it worse. Sometimes, the only way to get people to stop doing bad things to you is to get allies and to know you are not alone. The minute the Kangaroo expresses belief in the Whos, the Wickersham Brothers disappear.

That or monkeys are just a bunch of jerks.
Dr Seuss Horton Wickersham Brothers