The Following Will Amaze and Delight

March 16, 2012
Okay, I've been gone for a while.  Guess what?  I'm going to be gone for a while longer.  I have a day job that has been making me a little bit tense at the moment.  No idea how long I'll be disappeared for this time... hopefully not long because I have Pizza and  Movie Day coming up!

This week, the following happened.

March 10, 2012 6:33 AM
It was a morning like any other morning in our home.  The CBC news gave me an idea of how bleak a place the world really is (due to the fact it meant I had to get up, more than the news itself). There were hungry cats that demanded food.  I checked for snow, found that it was still there where we had left it the previous night.  The hungry cats continued to demand food, so I poured them a scoop each of their favourite/only cat food.  They were satisfied, more or less.

I grabbed the industrial sized box of Mini-Wheats (we will probably pay off the Costco membership in Mini-Wheats alone) and poured myself a bowl.  I grabbed the milk from the fridge and was just about to pour it in when this happened.

I could hardly believe my eyes, so I took a closer look.

I've gotten doubles before, and I'd heard rumours about them, but I had never experienced the QUADRUPLE MINI-WHEAT for myself!!!

I immediately showed it to My Lovely Wife who said "Ooo! You should take a picture!"  So I did, because I love my wife.  And also because I needed to make sure that our grandchildren will know about the awesome Mini-Wheat I once got.

That was a few days ago.  I had (if you can believe it) almost forgotten about the events of that morning.  And then this evening at around 8:00, something else entirely happened!

March 15, 2012 around 8:00 PM-ish
My Lovely Wife had to get in a few hours of study for the course she's taking, so I retreated to the basement for a few hours of removing the tension of a long day at the office (by playing video games, geez, not EVERYTHING is about sex).  I played a little Batman Arkham Asylum (which, as it turns out, is still a great game), but after an hour of beating thugs up I felt it was time for the television to pander to me without my having to use the controller.  Because I'm that lazy, that's why.

The only thing better than watching an episode of Leverage on Netflix is watching Leverage on Netflix with a snack.  Off I went to the kitchen to fetch some fine potato chips and some dip.  Chips and dip securely in hand, I gave My Lovely Wife a kiss and returned to the couch for some brain numbing.

Like many people, I look at my potato chips before I eat them.  I check to see what sort of general shape it's in.  Is one side coated slightly more with salt and/or artificial flavouring than the other, and thus should be placed on the tongue to ensure maximum taste exposure?  Is it curled up on itself, and thus will grant a wish to whomever consumes it by stuffing the entire thing in their mouth all at once?  Does it have a shape that resembles the silhouette of a fair maiden or maybe naughty bits?  Is there a bug on it?  These are things that we all watch for.

And that's when this happened:

Yes, I found a little guy in my chip.  He kind of looks heroic, so I have decided to call him Potato Chip Hero.

Actually, on second thought, he looks a little familiar. 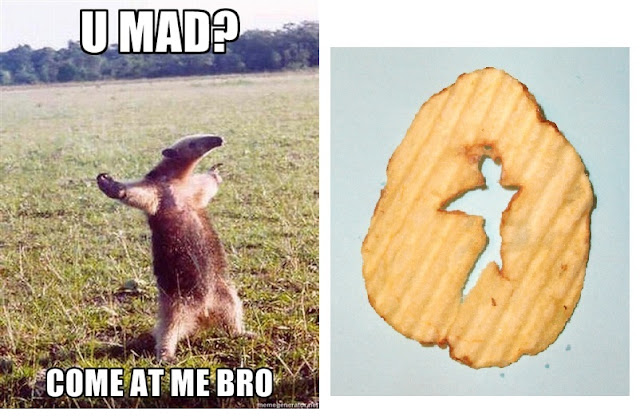 I think I'm going to sell him on eBay.  There are totally people that would buy that on eBay.  I'd sell it on Kijiji, but I don't think I'd actually want to meet the person that feels they need to own this.
breakfast giant mini wheat potato chip hero potato chip man quadruple mini wheat u mad chip