April 23, 2021
If you are having a rough week or just a bad day, here is a picture of my daughter learning to play Monopoly with me last weekend. 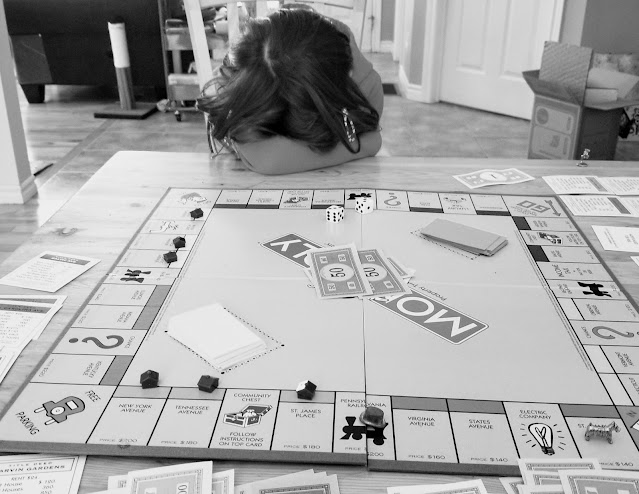 You can take the laugh and leave or keep reading for some emotional stuff. It gets a little sappy.
.
.
.
.
.
.
.
.
.
.
.
.
.
.
.
.
.
.
Still with me?
She was so excited when I offered to teach her how to play last weekend. I assumed she wouldn't last a full game so I'd take it easy on her so she'd play long enough to get the mechanics of it. How to buy properties, pick up Chance cards, pass go and collect your money, land on someone's property and pay rent. We would play nice and easy and have a good time until someone throws the board up in the air.
She did not have the best of luck. She landed on Go to Jail her first time around the board (which would happen five more times). All of her Chance and Community Chest cards were bad. She landed on the Income Tax space three times in a row. I didn't think we'd be talking about mortgaging property until after we played a few times, but as you can see she already has one card flipped over.
I did some trades with her to help keep the game going and she ended up with the first monopoly of the game. She was so excited to build houses on the orange properties right in front of me. She'd fix her houses every few turns because the board would get bumped and they'd get knocked around.
It was a game of ups and downs. She'd be up then lose everything the next turn. She got a little upset (as you can see) but kept going and didn't break down and didn't give up. And you know what? She got those houses up to hotels. I called an end to the game when I landed on New York Avenue with a hotel.
Your first reaction to this picture is probably that it's a little adorable and maybe you laughed a little. I would be lying if I said it wasn't funny. We've all been there, right? In Monopoly or life (or the Game of Life!), we can all relate to how she feels. Sometimes no matter what we do things don't go our way. Sometimes you can do everything right and still fail.
This has been a rough week for me and hundreds of my co-workers. We've been told that most of us will still have jobs, but those jobs aren't going to be with ExxonMobil and "most" is not "all". I feel like her in this picture: head down on my desk, just trying to hold it together and not scream and cry while the next thing gets thrown at me. I want to throw my hands up in the air and stomp off and slam my door and shout about how unfair it all is.
I took this picture when she felt like everything was just the worst. But she never gave up and she wouldn't quit. She wanted to finish the game. I didn't take a picture of her reaction to winning, but I don't need it. I literally have thousands of pictures of her smiling, hundreds of her laughing and having a great time. I don't have any pictures of her pushing through like this.
What am I going to do? Roll the dice and see where I land? Stay where I am? Pack up the game and play some Uno? I don't know yet. I know it's cliché but it's true that family is the most important thing. What I'm doing isn't as important as who I'm doing it for and with.
"It's your turn, Daddy," she's saying into her arms. "Go."
I love this picture.
Life lessons monopoly motivation motivational