April 11, 2021
Why?  Why would I toilet train the cat?
We adopted a cat from the SPCA just before Christmas.  He is an adorable black cat. We've never had a playful cat before - of our previous cats, one was an assassin who was more interested in drawing blood than chasing a toy and the other was afraid of everything and would hide if you tried to play with him. Basically, brand new cat in every way.
His litterbox is in the rec room bathroom. Why not put it in the storage area of the basement?  You generally want the cat litter to be away from you as much as possible because of odors, but experience has taught us that also makes it even less pleasant to change the cat litter.  Boo hoo, I have to walk all the way to the basement and all the way to the furnace room to change the cat litter, wah me, I know. Don't judge me.
I now spend a lot of time in the rec room because that's where I've put my home office. Bad news that it's inconvenient to use the bathroom closest to me, but good news I am motivated to change the litter because the odor prompts me to. This is healthier for the cat, healthier for us, and I don't hate doing it.  It's just a thing to do.
So why have I decided to toilet train the cat?
Since we are environmentally conscious people, we started using a recycled paper based litter that is a little more expensive than the regular clumping clay we would have used before.  We go through it a little faster than the regular litter, so we're spending about $25/month on cat litter.  I was changing the litter last week and realized "wait, that's $250 a year that we're spending so that I can spend time scooping poop and pee up?"
The money by itself, not enough. But the money + the litterbox next in my space all day + general laziness? That's right up my alley.
After doing the intense research of the most advanced anti-vaxxer, I determined there are basically 4 steps to training the cat to use the toilet.
It's simple and easy!
Started strong.  Moved the litterbox closer and closer to the toilet all week, and no problem. This is going to be a breeze because it turns out that our adopted cat is a genius.
The fact that the cat has understood that I want him to not poop in the litterbox is pretty amazing.  I mean, we're only a week in and he's achieved so much.  He figured out the goal, but has slightly misunderstood the target.
Is it my fault that the cat now poops in the sink? 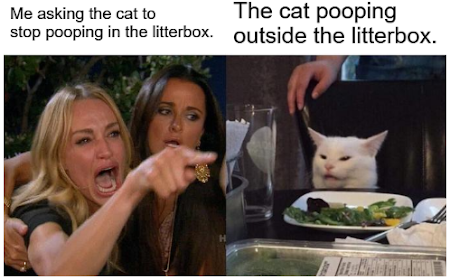 I finally got the litterbox next to the toilet.  It's not my fault that the only way to get it next to the toilet is also next to the sink. It's not my fault that the litterbox is now halfway between the toilet and the sink.  I mean, come on, that's the fault of the people who installed the bathroom in the basement without consideration that the future owners would be toilet training their cat in this room.
Okay, maybe that first time was my fault. I moved the box back a bit and that should take care of that.
Except now he's doing it all the time.

Then today he peed in the shower, which is nowhere near the litterbox. I feel that he is perhaps just confused by my reaction to his pooping in the sink. 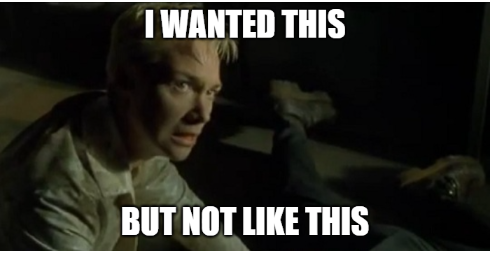 I am unwilling to give up. This is a battle of wills between the two of us and I am bigger and mostly smarter than this cat.
Stay tuned for week 2, when I may make more poor decisions (both for continuing this exercise and also misusing memes).
cat cat pee in shower cat poop in sink litterbox toilet train cat